­­In a further move to ramp up their campaign in the run-up to next year’s State Election, more than 100 people turned out in force at Parliament House today (Thursday, November 17) to protest against a plan to construct major roads through unique and protected sand dunes at Scarborough Beach.

The rally held, on the steps of Parliament House, called for an end to a decision to build the roads as part of a Metropolitan Redevelopment Authority and State Government Scarborough Master Plan.

Members of the Beach Not Bitumen group addressed the rally and handed a 3,000 signature petition to the Shadow Minister for the Environment, Chris Tallentire, and Shadow Minister for Planning, Rita Saffioti, calling on their support to stop the planned roads.

Also addressing the meeting, Piers Verstegen, the Executive Director of the Conservation Council of WA called on the State Government to abandon the road plans.  He said that building roads this close to the foredunes at Scarborough Beach would defy State Planning and Coastal Policies and common sense.

“These coastal dunes were recognized as regionally significant as long ago as the early 1980’s when they were included in Perth’s Bushplan, to even consider destroying these important Bush Forever areas is completely irresponsible”, Mr Verstegen said.

The campaign to stop the roads has been gaining momentum since early November when more than 200 protestors successfully lobbied a City of Stirling Council meeting to secure a delay in handing over Bush Forever sites at the beach to the MRA.

While the Council has agreed to defer handing over the land so that the MRA can consider alternative transport options to the roads which would cut a large swathe through protected sand dunes north and south of Scarborough Beach, the protest group has decided to escalate their campaign, taking it into the political arena with the aim of getting all major political parties to rule out the roads ahead of the State election in March next year.

Just days after the Council delayed the handover of the Bush Forever reserves in what protesters called a  “blatant land grab” by the Minister for Planning,  it was reported that both Scarborough MLA, Liza Harvey and current Planning Minister, Donna Faragher have agreed to consider alternatives.

“While this change of tone is welcomed, our aim is to have the State Government rule these roads out now with no further delay” , said Robyn Murphy spokesperson for Beach Not Bitumen.

“Our group was launched just three-and-half-weeks ago and in that short time we have received a huge amount of  support from people everywhere concerned about the adverse impact of the proposed roads on the fragile sand dunes north and south of Scarborough Beach,” said Robyn Murphy.

“The natural environment north and south of Scarborough Beach is valued by locals, beach users and tourists.”

“The 3000-plus signature petition being presented to Parliament today, is a strong demonstration of that support.

“The Member for Scarborough, Liza Harvey, has been sitting on the fence but it is now time for her to make her position clear.  If she doesn’t oppose the roads then she must support them.

“There is no middle ground, there is too much at stake for the environment and the conservation of important Bush Forever coastal dunes north and south of Scarborough Beach.”

Ms. Murphy added:  “Our campaign against the building of these unnecessary and environmentally damaging roads through coastal dunes north and south of Scarborough Beach will continue and strengthen until the plans are abandoned by MRA and the State Government.”

“The ball is in their court, we will never give up”, she added.

“This change of tone by the Minister is good progress. But it is not yet enough. The roads need to be ruled out of the Scarborough Master Plan now, so that all stakeholders can focus on developing an integrated plan of sustainable transport options for the Scarborough redevelopment”, he said.

“Expert advice, best practice development around the world, and the community, all point the same way. The MRA’s plan for the road extensions, on the other hand, is pointing backwards. We are now in an era where authorities around the world are taking out roads and rehabilitating their prime waterfront locations. They’re not putting roads in.” Anthony James said.

“The City of Stirling has done the leg work on light rail and bus rapid transit already. We’re told it is ready to go, if the state government backs it. Here we have a redevelopment fund of $75m – $48m from the MRA. Now is the time to develop solutions like these, along with world class cycling and pedestrian infrastructure, car share operations and many other 21st century solutions.”

“We call on the MRA and all political parties to rule out the roads now, and let’s get this once in a generation redevelopment right.” 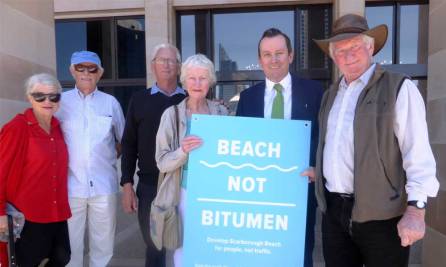 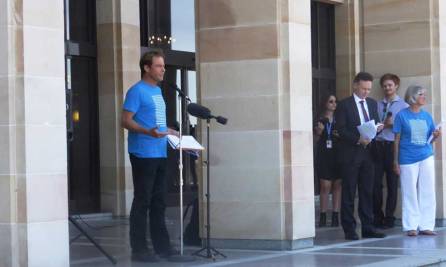