THERE IS A BETTER WAY.  WHAT CAN BE DONE INSTEAD?

1  Create a vision for the best of everything at Scarborough

Rule out the proposed road extensions. Keep the beachfront for people and the coast we love. Design a plan that reduces traffic to and at the beachfront, rather than increases it, making sense of the planned decrease in parking. Maintain and enhance the beachfront with people-friendly areas that encourage more active, safe and healthy engagement with the coast.

Integrate all this with the redeveloped central area, with its shops, cafes, parks, facilities, markets, events etc., and we can have the best of everything at Scarborough – exactly what people are asking for, a genuine piece of 21st century planning including a beautiful natural environment.

Fulfil the vision in the MRA Master Plan of the Transit Hub on Scarborough Beach Road West being a place for high frequency public transport and world class walking and cycle ways (facilitating access to the beachfront, not just for when you get there).

The MRA’s planned ‘transit hub’ is in the area of the existing bus stops near the clock tower. The MRA says this has the potential to be a high quality, high frequency active and public transport access point for Scarborough. We agree.

It could feature a free CAT service, like the ones in Perth and Fremantle, and even a free shuttle bus to move people north-south along the foreshore. Along with a high frequency bus to Stirling train station, in addition to the existing one to Glendalough. This can also service the planned ‘2nd CBD of Perth’ at Innaloo, until or if the proposed light rail on Scarborough Beach Road happens.

“Amid funding constraints, more investment focus must be given to public transport to allow activity centre accessibility levels to be similar to the CBD, and to prevent Perth’s roads from becoming the most gridlocked in the nation.”  – Chris Sheedy, in Horizons, the RAC magazine

Every bus = around 60 cars off the road, so several high frequency services connecting with the broader Transperth network will make a big difference to traffic levels. Then once people are at the beach, they’ll have a number of options to move along it, without needing their cars.

“There is high demand for bus services connecting Scarborough and the Perth CBD that operate along Scarborough Beach Road.”  – Arup’s Access, Movement and Parking Report for the Scarborough Master Plan

Also feature high quality bike lanes to the beachfront (not just at the beachfront), like those proposed for the CBD in the state transport plan. As the MRA states in the Master Plan, this will require plenty of bike locking facilities at the beachfront – visible, safe and accessible.  And it will need inclusion of cycling groups to formulate all this. To this point, they have been excluded from the planning process, even from the Transport Working Group (Westcycle’s
nomination for inclusion in the Community Advisory Group was declined).

Expanding bike hire opportunities also has great potential for the beachfront. Bike racks could also be installed on buses. These are common to many cities overseas, and are currently being expanded in the ACT and being prepared for trial in Victoria.

Whatever is done, it will be important to consult key interest groups, and to integrate the range of services so people have all sorts of handy, attractive, affordable and sustainable options to choose from. This will genuinely address congestion and create a world class redevelopment fitting of the Scarborough beachfront.

Each of these has become extremely popular in cities all around Australia and the world, and this popularity will only increase in this ‘peak car’ era. It is also part of what the community has called for in the MRA survey leading up to the Master Plan.

The beachfront redevelopment at Scarborough must have expanded bike sharing facilities. A number of car park spaces could also be allocated to car share companies.  Complementing this can be the popular cycling taxis, such as those in other parts of Perth and Australia, and of course other ride sharing ventures could be encouraged to feature in the mix, from the traditional taxi to enterprises like Uber.

Car sharing is now operating in Perth. Student Car Share is the first initiative,
led by Sunset Rent A Car, a Scarborough based company. They are clearly
well placed to explore expanding on that program as part of the Scarborough
redevelopment.

4  If necessary, create under or above ground parking that keeps traffic east of West Coast Highway

Allow traffic to the beachfront, not on it! So that people can exit on foot close to
or directly into the foreshore area, without taking their cars there. If necessary,
as suggested by the MRA’s transport consultant, under or above ground
parking can be created on the east side of West Coast Highway. This would
also ensure that West Coast Highway experiences less congestion, as less
traffic will be seeking to cross it.

Many cities around the world do this. For example, Southbank in Melbourne has people exit an underground car park to walkways by the Yarra River. The riverside is then for pedestrians, cyclists, artists, buskers, markets, dining or lounging about enjoying the sights and sounds. 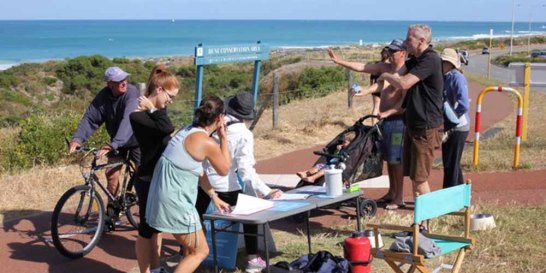